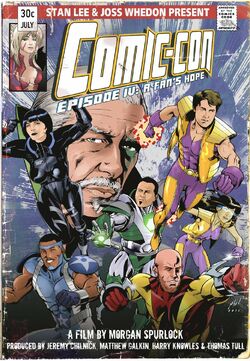 Comic-Con Episode IV: A Fan's Hope is the latest title to be added to Wrekin Hill and NECA's partnership whereby the two companies join to distribute four to five titles theatrically each year. They have previously worked together on such films as Spencer Susser's "Hersher," starring Joseph Gordon-Levitt, Natalie Portman, and Rainn Wilson; and Alexandre O. Phillipe's documentary comedy "The People vs George Lucas."

Presented by Stan Lee, Joss Whedon and Harry Knowles, Comic-Con Episode IV: A Fan's Hope takes a behind-the-scenes look at this amazing cultural phenomenon where fans gather by the tens of thousands annually to attend the ultimate geek mecca in San Diego --- a fringe comic book convention that has grown into the pop culture event of the year. The film was produced by Spurlock, Jeremy Chilnick, Matthew Galkin, and Thomas Tull; and written by Spurlock and Chilnick.

"We are truly excited to release this fascinating documentary day-and-date in both traditional theaters and via the increasingly popular VOD platform. Partnering with NECA and adding in a live tour element to the film's release will give audiences a multi-dimensional look at the Comic Con experience."

"This film is a geek-tastic celebration of dreams and wonder. Comic-Con is not just an event it is a state of mind, and this film shows why we love it and what everyone else has been missing."

On February 23, 2012 Chris Ball, President and CEO of LA-based film production and distribution company Wrekin Hill Entertainment, and Joel Weinshanker, President and CEO of the National Entertainment Collectibles Association (NECA), a movie merchandising powerhouse that has become an essential tastemaker for the all-important Fanboy culture, announced initial tour dates and a theatrical/VOD day-and-date release date for Academy Award-nominated director Morgan Spurlock's latest gem "Comic-Con Episode IV: A Fan's Hope." The fanboy documentary will have a day-and-date release on April 6th, with a multi-city tour of the film kicking off on Thursday, April 5th.

Beginning in Atlanta, Comic-Con Episode IV: A Fan's Hope tour stops are being planned as fan gatherings designed to recreate the "Comic Con experience." Along with a screening of the film, each stop will include exhibitor booths, animator portfolio reviews, costumes, and panels. The film will also play in traditional theaters beginning in New York and Los Angeles on April 6th.