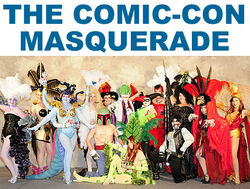 The Comic-Con Masquerade is an annual costume contest at Comic-Con that is so named because it also emphasizes characters, humor, song, dance, stage combat, and more. There are several divisions, award categories, and prizes for the Masquerade, which is usually held on Saturday night of convention.

Comic-Con is a celebration of the popular arts, and costumes play a vital role in nearly all of them, from movies, TV, comic books, fantasy art, and Broadway shows to computer games, toy collectibles, and more. The Saturday night Masquerade is for attendees to showcase their own amazing talents and creativity. It's a night where you never know what will happen next, a show full of spectacle, beauty, awe, comedy, battles, song and dance, surprises, and of course many impressive and clever costumes.

Not a dance or party as the name Masquerade might imply, the event is staged in the style of a talent competition, with a Master of Ceremonies, a panel of guest judges from costume-related fields, impressive trophies and cash awards, a large raised stage with theater-style lighting, and four giant high-definition video screens providing great close-up views gathered by multiple cameras. An audience of 4,200 fills the convention center's large ballroom to capacity, and about 2,000 more people watch the show on large video screens in the nearby Sails Pavilion and a second ballroom.

Some entries feature solo costumes, others are groups with a shared theme. Many costumes are re-creations from film, anime, games, and comics, but some completely original designs are presented as well. All genres are welcome, but no purchased costumes are allowed, as this is a contest of creativity and craftsmanship, not shopping ability. The Masters of Ceremonies will once again be the entertaining award-winning artists and writers Phil and Kaja Foglio of Studio Foglio.