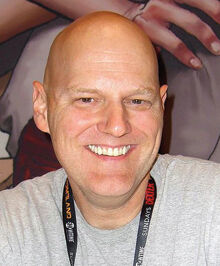 Erik Larsen was born in Minneapolis, Minnesota. He didn't live there long. He currently lives in San Francisco, California. He's written and drawn a mess of comics over the years, among them Spider-Man, Thor, Defenders, Punisher, Nova, Aquaman, Doom Patrol, and Wolverine. In 1992 he and a group of upstarts left Marvel in the lurch and formed the greatest comic book company in the history of the universe-Image Comics, where he's written and drawn the adventures of Savage Dragon for the last 20 years. It kicks serious ass.[1]