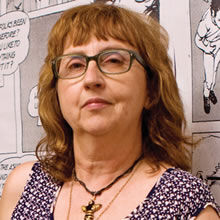 The first comic book Joyce Brabner ever published (outside of her work with her late husband Harvey Pekar on American Splendor) ended up in a federal court in Atlanta, when the U.S. Department of Defense decided it was a threat to national security. Joyce knew then she had found at least one more way to make trouble and has continued to be a thorn in the side of the ultra-right, ultra-left and -- hell! she has probably also pissed off UltraMan. Her first (nearly) non-autobio comic, The Colombian Arts Council Grant, written with Ray Dobbins and illustrated by Mark Zingarelli, is due out from Farrar, Straus and Giroux.

Her other works include Real War Stories, Brought to Light (with Alan Moore), Activists!, Animal Rights Comics, Our Cancer Year (with Harvey), Postcards: True Stories that Never Happened, and The Beats (also with Harvey). Joyce Brabner and Danielle Batone will be at Comic-Con together to talk about Harvey Pekar, Joyce's late husband and collaborator and Danielle's guardian and hero.