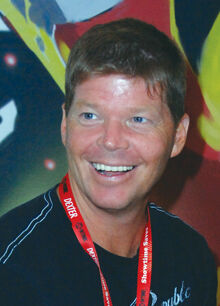 Rob Liefeld's comics career began in the late 1980s at DC and was jump-started by his work at Marvel on New Mutants and X-Force in the early 1990s; while at Marvel he co-created the characters Cable with writer Louise Simonson and Deadpool with Fabian Nicieza. In 1992 he and six other popular young comics artists left Marvel and co-founded Image Comics. His work at Image has included Youngblood and the recent series The Infinite, written by Robert Kirkman. He is currently drawing Hawk and Dove for DC Comics, a title he also worked on very early in his career.[1]