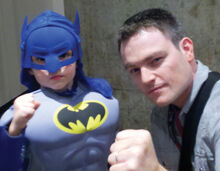 New York Times bestselling author Scott Snyder is the current writer on Batman and Swamp Thing for DC Comics, creator with artist Rafael Albuquerque of the Harvey and Eisner Award–winning series American Vampire for Vertigo, and co-creator and co-writer with Scott Tuft on the historical horror comic Severed for Image Comics. He is also the author of the story collection Voodoo Heart from the Dial Press/Random House. He lives in Long island, NY with his wife and two young sons and is a very big and un-ironic fan of Elvis Presley

At the age of nine, Snyder attended a summer camp where one of the counselors read Stephen King's Eyes of the Dragon to him over the summer, an experience that Snyder says "really jump-started my love of story-telling." He was also influenced by the writing of Denis Johnson, Raymond Carver, Rick Bass, Joy Williams, and George Saunders

Snyder graduated from Brown University in 1998 with a degree in creative writing, and then worked at Walt Disney World for about a year. Snyder's Disney World stint strongly influenced his writing; he later recalled, "it did a world of good for my writing...All the things I ended up writing about, those things that are deeply frightening to me—fear of commitment and growing up, fear of losing loved ones, the wonder and terror of falling in love—all of it was constantly being played out all around me in this weird, cartoonish, magnified way at Disney."